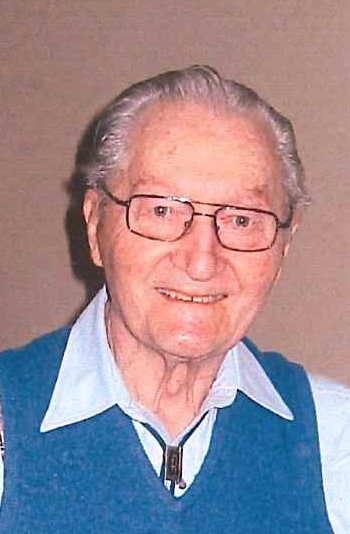 Walter was born in East Camden, NJ on April 15, 1916.  He graduated from Woodrow Wilson High School in 1934 and later from the Camden Business College and the Engineering Institute of Philadelphia.  He studied Mechanical Engineering at the Univ of Pennsylvania.

He enlisted in the Army Air Corps in January 1942 immediately after Pearl Harbor and graduated from Officers Training School.  Walter served in the Intelligence Officer Branch and was honorably discharged as a 1st Lieutenant in 1946.  He married his beloved wife Mary in 1949.  He was preceded in death by his wife Mary (nee Klapps) in 2005, his daughter Carol in 2009 and his only brother Albert and his late wife Elsie.

After the service he worked in sales at his father’s business “Ice Plant Equipment Company” in Philadelphia.  He and his brother Al owned and operated the business until he retired.  Throughout his career, Walter attained many industry awards and accolades.

Walter’s love of the outdoors followed him throughout his life.  His two favorite places were the Jersey Pine Barrens and the Delaware Water Gap where he and his family enjoyed camping for many years.  After retirement, he and his wife loved to take adventurous trips all over the world.  He enjoyed riding his dirt bike in the Jersey Pines most of his life until he was 90 years old.  Walter held a private pilot license for airplanes, seaplanes and gliders and was also a member of “the United Flying Octogenarians” for pilots still flying over the age of 80, the “80 Plus Ski Club” and the Cooper River Yacht Club. Walter also served as a volunteer on the Battleship New Jersey restoring it for 8 years until he was 92.

Walter had the unique quality of being satisfied with what he had and was never interested in obtaining bigger or more impressive material things.  He always kept in touch with old friends and will be missed by all who knew him.

Relatives and friends are invited to the Visitation and Funeral on Saturday from 9 AM at the Falco/Caruso & Leonard Pennsauken Funeral Home, 6600 N. Browning Rd, where a Funeral Service will be held at 10:30 AM.  Entombment will follow at Calvary Cemetery in Cherry Hill.

In lieu of flowers, memorial donations may be made in Walter's name to the Battleship New Jersey, 62 Battleship Place, Camden, NJ 08103 or via this link:     https://www.battleshipnewjersey.org/support/donate/

Share Your Memory of
Walter
Upload Your Memory View All Memories
Be the first to upload a memory!
Share A Memory
Plant a Tree