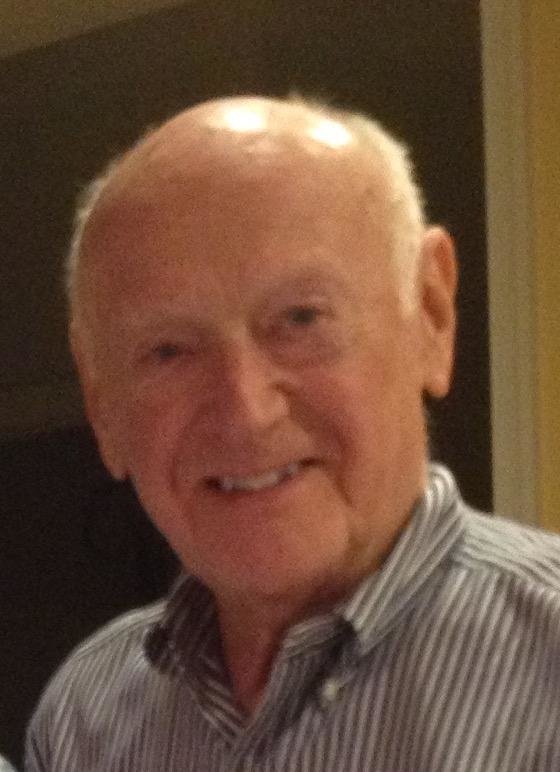 Warren E. Baumgartner, age 92 years, of Cherry Hill passed away peacefully on April 26, 2021, at Samaritan Hospice in Voorhees, NJ. Beloved husband of 26 years to Elisa R. Balestra and the late Joan M. Baumgartner. Devoted father of Michael W. Baumgartner (Liz Layton), Peter D. Baumgartner, Jane B. Hightower (Keith) and the late Sue Ellen Schilling. Loving “Pop” to Caitlin, Kyle and Hayley Hightower. Dear brother of the late William A. Baumgartner. Warren was born and raised in Newark, NJ, and graduated Irvington H.S. in 1946. He was a United States Marine Corps veteran and a 1952 graduate of Seton Hall University. Soon after, Warren began his career with PSE&G in Jersey City, eventually moving his young family to Holmdel, NJ, in 1957. During the Holmdel years, he was active in local politics and donated his time working with the township zoning board and the Monmouth County Bayshore Outfall Authority. Warren was a member of the Knights of Columbus and was also active in coaching youth baseball; one of his proudest moments being at the helm to see his Matawan-Holmdel Pirates Babe Ruth League team win the 1974 NJ State Championship. Having begun his tenure in 1966 at what is now PECO Energy, Warren spent years commuting daily to Philadelphia from Monmouth County via train with a small knot of like-minded buddies who contemplated - and nearly solved - the world’s problems for the rest of us. In 1975, Warren reluctantly relocated the family to Cherry Hill for a shorter commute and an earlier dinner time. After a midlife infatuation with running and obsession with the “runner’s high” Warren co-founded the “Over The Hill Gang Running Club” with some pals; many of whom remained lifelong, loyal friends. One can only guess the number of miles Warren logged on that track behind Cherry Hill H.S. East over the years. Following decades of managerial positions within Corporate Communications, Warren retired from PECO in 1990 but not before winning multiple 1st Place Display Awards in the 70’s and 80’s for the PECO exhibits in the annual Philadelphia Flower Show. Warren was also instrumental in the idea, implementation and installation of the landmark Crown Lights atop the PECO building. He was immensely proud these lights had progressed from thousands of manually maintained single bulbs in a chasing-message pattern to the LED display they are known for today. Fittingly, PECO blessed Warren with a personal send-off message on the Crown Lights upon his retirement. Side note: pilots and flight engineers still use the lights as a sight landmark upon descent into Philadelphia. Retirement allowed Warren to travel the US and the world visiting friends and family, integrating his athletic pursuits. Climbing Mt Whitney in California with his sons was a highlight as was hiking with his daughters in Utah as well as trying his hand at skiing. Grandchildren began to grace his life and he relished his role as “Pop Pop” and was able to see all of them through college. He enjoyed golf with friends and trips down the shore, especially Ocean City. He loved traveling to his wife’s native Italy and spending time with extended family in Alba Adriatica. An avid and long-suffering Eagles fan, he held season tickets through the ugly years and got to watch that epic Super Bowl 2018 alongside family. Warren loved nothing more than a good ballgame whether it be from the dugout, the stands or the couch…and attended countless Phillies games and playoffs going all the way back to Connie Mack stadium to Game 5 of the 2008 World Series and beyond. Warren passed down the devotion and love of baseball to his kids and grandkids and each of them will fondly remember attending games and having a “catch” in the yard with him. Warren was a no-nonsense business person and tough disciplinarian but with a soft center…he was a gentleman above all and witty as heck and absolutely kept us on top of our sarcasm game. We are blessed to have had Warren in our lives and he made each of us richer for the experience. He will be missed dearly and will be remembered always. In lieu of flowers, contributions in Warren’s memory may be made to the Alzheimer’s Association, 3 Eves DR, Suite 310, Marlton, NJ 08053 or to the charity of the donor’s choice. Relatives and friends are invited to visit with family Thursday, May 6 8:30-9:30 AM at the Falco, Caruso & Leonard Funeral Home, 6600 North Browning RD, Pennsauken, NJ 08109. Mass of Christian Burial Thursday, May 6, 10:00AM at St. Peter Roman Catholic Church, 43 Maple AV, Merchantville, NJ 08109. Interment will follow at Colestown Cemetery in Cherry Hill.
Thursday
6
May

Share Your Memory of
Warren
Upload Your Memory View All Memories
Be the first to upload a memory!
Share A Memory
Send Flowers