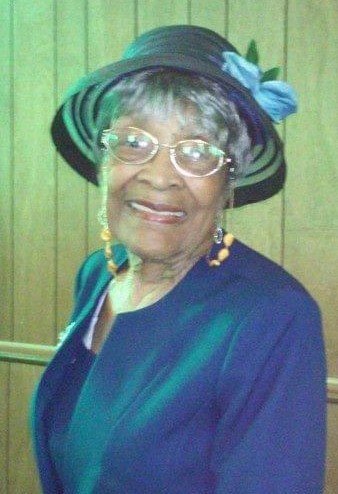 Camilla Blackwell-Smith (nee Harris) age 91 years of Pennsauken, passed away on August 5, 2021 at Our Lady of Lourdes Hospital in Camden.

Camilla Blackwell-Smith was born March 17, 1930 in Greenwood, S.C. to David and Bessie Harris as the youngest of their ten children.

At an early age she was brought to Harlem, NY where she was raised and educated graduating from Washington Irving High School and also attending Dr. Roche Finishing School to become a beautician.

In 1951, Camilla married Mervain Gibson and from that union they had one daughter, Gina.

After planting roots in New Jersey, Cam or Miss Cam as she was known, settled in the Parkside section of Camden then eventually Pennsauken. She would go on to work with the United States Postal Service where she gave 37 years of service retiring in 1997.

In 2005, after a brief romance she married Jesse Smith who preceded her in death.

Sis. Blackwell, as she was affectionately known, was an active member of New Mickle Baptist Church for over 50 years. She served as President of the Gospel Choir,
President of the Nurses Unit, Treasurer and beloved Trustee and Missionary. She enjoyed ministering to those needing help or offering kind and encouraging words.

Camilla loved to travel but as she aged and her health declined, she fondly made her visits by phone. Although she loved her phone visits, everyone knew that phone visit time was off limits during Matlock and The Rifleman. If you came to visit, she would offer you whatever she had to give.

Relatives and friends are invited to the Visitation and Funeral on Saturday, August 14, 2021 from 9-11 AM at the Falco/Caruso & Leonard Pennsauken Funeral Home, 6600 N. Browning  Road, where a Funeral Service will be held at 11 AM.  Interment will follow at Sunset Memorial Park in Pennsauken.
Psalm 34:1-3 “I will praise the Lord at all times. I will constantly speak his praises. I will boast only in the Lord; let all who are helpless take heart. Come, let us tell of the Lord’s greatness; let us exalt his name together.”
Saturday
14
August

Share Your Memory of
Camilla
Upload Your Memory View All Memories
Be the first to upload a memory!
Share A Memory
Send Flowers
Plant a Tree