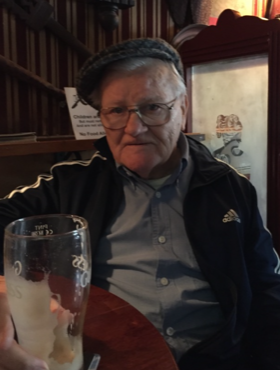 Mike, who was also known as Mickey, was raised in North Camden, and attended St. Mary’s grade school and Camden Catholic HS where he graduated in 1954.  He claims to have had an advanced degree in the school of hard knocks.  He met the love of his life, Rita McLaughlin in high school who he later married.  Mike enlisted in the US Navy in September 1954 and served 4 years.  After being Honorably Discharged he began a long career with the Philadelphia Naval Shipyard where he held various positions.  Rita and Mike were married August 1957 and began a family the following year.  They went on to have 8 children, 28 grandchildren and 14 great grandchildren.  Mike was proud of each one of them.

Mike enjoyed reading, Irish music, watching his beloved Phillies and Eagles while drinking a beer, and shooting pool with his best friend and brother Joe!  Dad was a simple man but was extremely proud of his Irish heritage and his Catholic faith and being a lifetime member and Past Commander of the VFW Post 1270 in Pennsauken.  He also liked to tease and show off his incredible strength.  He was not much of a singer but that did not stop him. He spent many years at the Jersey Shore (LBI) and could be seen playing with us on the beach or letting us jump off his shoulders in the water.  Dad taught us many things but the life lesson with the most impact was him saying in a booming voice “You’re a Lynch” which meant somehow, we could conquer the world and accomplish anything. His other words of wisdom to his kids: “You’re a leader, not a follower”.  Perhaps his most admiral quality was that he never said a bad word about anyone.  Dad lived most of his life in South Jersey, but the last few years were spent between CA and NV where Michael and Yen cared for him.

Up the rebels!  You will be forever missed.

Relatives and friends are invited to the Visitation & Funeral on Sunday, July 10, 2022 from 6-8 PM and Monday, July 11, 2022 from 8:30-9:30 AM at the Falco, Caruso & Leonard Pennsauken Funeral Home, 6600 N. Browning Road. Mass of Christian Burial will be celebrated at 10 AM at St. Peter's Church, 43 W. Maple Ave in Merchantville. Interment will follow at Calvary Cemetery in Cherry Hill.

In lieu of flowers, memorial donations may be made to Holy Innocents Children’s Hospital, Uganda at http://www.holyinnocentsuganda.com/ OR to The Legacy of Life Foundation at https://www.legacyoflifefoundation.org/give/donate/